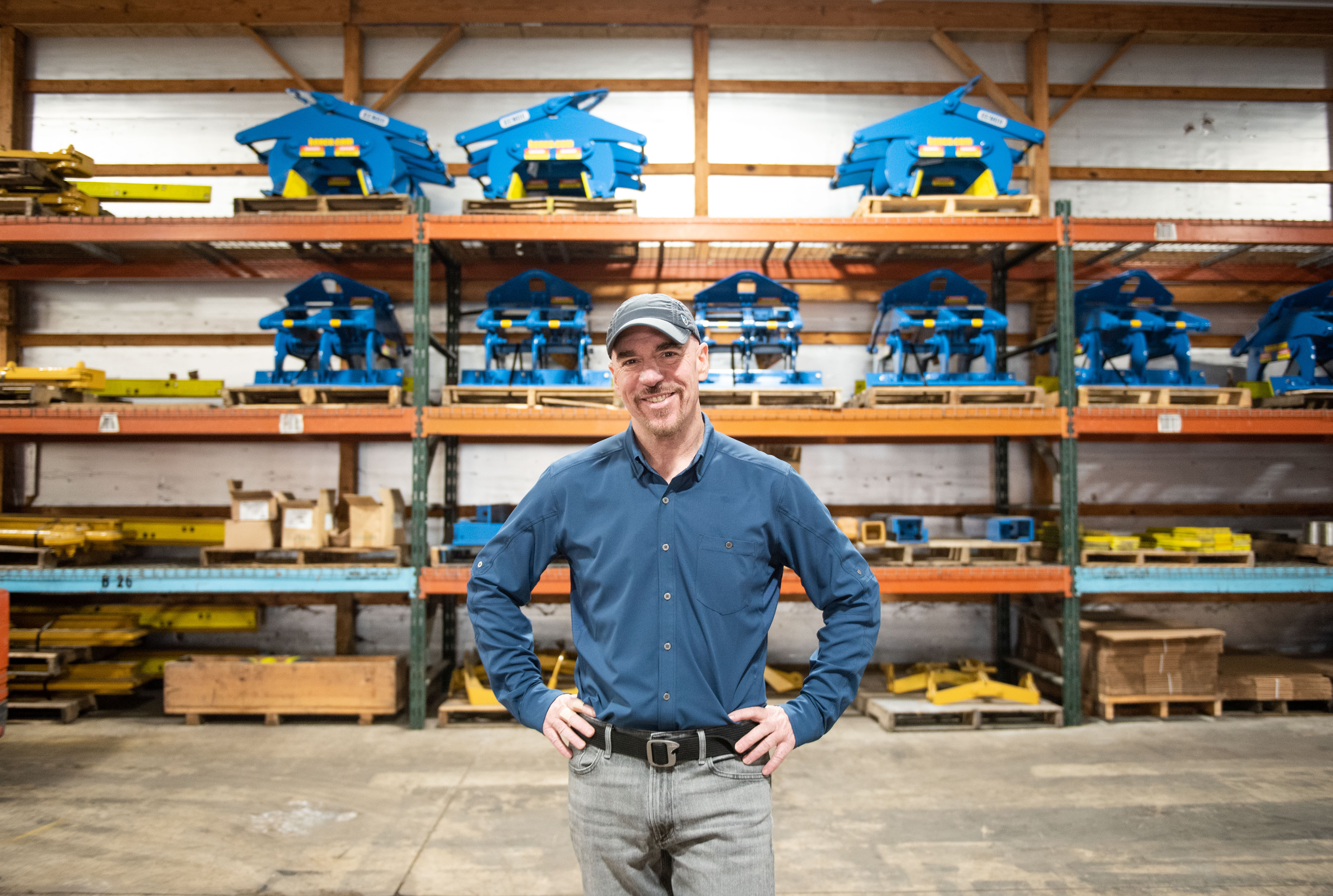 Bill Douglas (B’86, MBA’89), President of Kenco Corporation, knows the price of success: Have an entrepreneurial mindset, work extremely hard and possess an unwavering devotion to making a difference.

Bill recounts walking through the Century III Mall as a young boy with his mother and watching vendors sell products from their carts.  “We need to come up with something to sell on these carts,” she would tell him every time they passed through.  Bill says that his mother’s enthusiasm instilled an entrepreneurial mindset within him.  Years later, he became a very successful entrepreneur and business owner in his own right.

“My advice to entrepreneurs—stick with your dreams!  Keep your mind open to ideas that come along and don’t be afraid to pursue them.  I never thought of giving up.  I just kept going for it.”

From Idea to Launch

More than 30 years ago, Bill was working as a project coordinator for a highway construction company when he recognized the need for a better way to lift median barriers.  He witnessed first-hand the ineffective method of moving concrete barriers by wrapping chains around them or sliding pins through them.  It was difficult to pick up barriers and set them in place safely.

Then Bill had an “aha!” moment.  He saw how steel ingots and slabs were moved in a steel mill with an instrument that resembled scissor tongs.  Bill then applied this principle and created a product called the “Ken-Lift”—a big set of tongs for moving, setting and placing concrete median barriers, while protecting nearby workers.  This barrier lift became the flagship product for Bill Douglas and Kenco Corporation.  The scissor design uses leverage, so the heavier the object the tighter the grip.  It’s a gravity-driven instrument with no hydraulics or other activation.

As the years passed, this same scissor design became the standard for Kenco’s lifting attachment line of products.  As a full-service manufacturer, Kenco offers a wide selection of material handling attachments for excavators, loaders, backhoe, dozers, and other equipment.  The Kenco engineering team also designs custom attachments to meet specific job needs for construction and demolition projects.  For example, Bill used the same principle for the Ken-Lift to create a lift for pipes, where the tongs curve around the pipe.  Most importantly, every lifting device is hand tested by Kenco engineering staff before they leave the firm’s manufacturing facility in southwestern Pennsylvania.

From Guerilla Marketing to the Discovery Channel

Bill’s business started out of his home.  He put the Ken-Lifts in the back of his pickup truck and drove to construction companies in Philadelphia, New Jersey and New York.  He talked with contractors and demonstrated the equipment, presenting them with flyers that he made.  Bill said, “Everyone has an idea of something that they want to invent.  In order to do that and be successful, you need to create a market for that product.  What I did was run around the country and convince people that they needed this product.  And now, it’s the only way to go.”  As contractors began to realize that Bill’s products were the key to solving many of their problems, Kenco quickly became successful.

In January of 2018, “Dakota” Fred Hurt of the Discovery Channel’s reality program, Gold Rush: White Water, reached out to Kenco looking for help with moving a boulder from a fast-moving creek.  The Alaskan team can be seen using Kenco’s Rocklift in Season One, Episode 7, “The Graboid.”

Bill earned his Duquesne MBA in 1989 and has no doubt that the degree has been vital to his success as President of Kenco.  He says the MBA sharpened his leadership and management skill-set while providing an excellent ethical framework.  “The classes taught me how to treat and manage people well to get the most out of them.  That has always stuck in my head, and that’s what you see at Kenco,” says Bill.

In addition to helping him establish a people-oriented culture, the MBA gave Bill the practical wisdom required to move his company forward.  “My Duquesne business degree basically gave me all of the groundwork that I needed to start my business, including classes in accounting, marketing, management, contracts, and transportation.  I deal with these issues day in and day out.  I own the company.  So without the MBA, I would be lost.”

The Kenco Corporation, based in Ligonier, PA, has 17 employees along with Bill’s two golden retrievers, Moose and Bear.