U.S. News and World Report has ranked Duquesne University among its Best Colleges rankings for 2020. The University is ranked No. 132 among national universities and is tied for the No. 16 spot among national Catholic institutions. 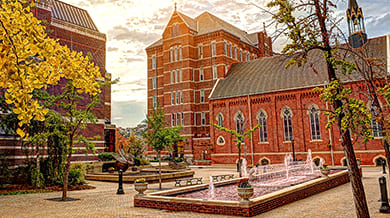 In addition, Duquesne ranked No. 51 in the Best Value Schools category and No. 93 in the Best Colleges for Veterans category.

Nearly 1,400 colleges and universities were included in the 2020 Best Colleges rankings. For its methodology, U.S. News evaluates 15 diverse measures of academic quality and emphasizes outcomes measures, such as graduation and retention rates, and social mobility. Other measures considered include expert opinions and student excellence.

“For more than three decades, we’ve collected and analyzed data on thousands of colleges and universities across the country and helped put schools on the map,” Kim Castro, editor and chief content officer of U.S. News, said. “We’ve found the best institutions to be ones committed to academically and financially supporting their students through graduation. They draw in high-quality professors and set students up for postgraduate success.”

U.S. News groups schools into categories based on the Carnegie Classification of Institutions of Higher Education—the most widely accepted classification system in U.S. higher education. The 2020 Best Colleges rankings reflect updates implemented by Carnegie in 2018, resulting in additional schools in the National Universities list.